They are sometimes called Whistle Pig. You know why if you’ve heard them shriek, this rotund being sunning on a rock, the largest of the Squirrel family. No matter their name, this being’s life looks pretty ideal from where we stand. Marmot spends half of the morning lying around on warm rocks and the rest of the day eating, and then they retire to their burrow for their evening rest.

But Marmot’s whistle is more than a tune. Hoary Marmot whistles to scare off predators such as Coyote, Eagle, and Fox. Hoary Marmot is named for their pelt. Hoary means “aged gray or white” and speaks to the silvery fur of this being, particularly around the head and shoulders. The rest of Marmot is reddish-brown-bodied and black-footed. In fact, caligata means “booted.” Lillooet and Nuxalk people value this being for both fur and meat. Traditionally, four tribal groups—Nootka, Kwakwaka’wakw, Tsimshian, and Tlingit—hunt Hoary Marmot, but southcentral Washington and northcentral Oregon Natives do not, for fear of eating Marmot’s whistle will cause them to go mad.

Hoary Marmot is characteristically charismatic. More sumo wrestler than distance runner, sometimes Marmot will spar for hours, standing on back legs, grasping forepaws, and merely pushing against one another. Which, by the way, they do for fun. Those living around Humans are not shy about approaching for a treat. They do best on a diet of green plants and seeds, though, so keep your sandwich for yourself.

Marmot mating brings about two to four pups and happens just after they emerge from the burrows where they have stayed for as many as eight months, living off the fat layer they accumulated before winter. When food is plentiful, 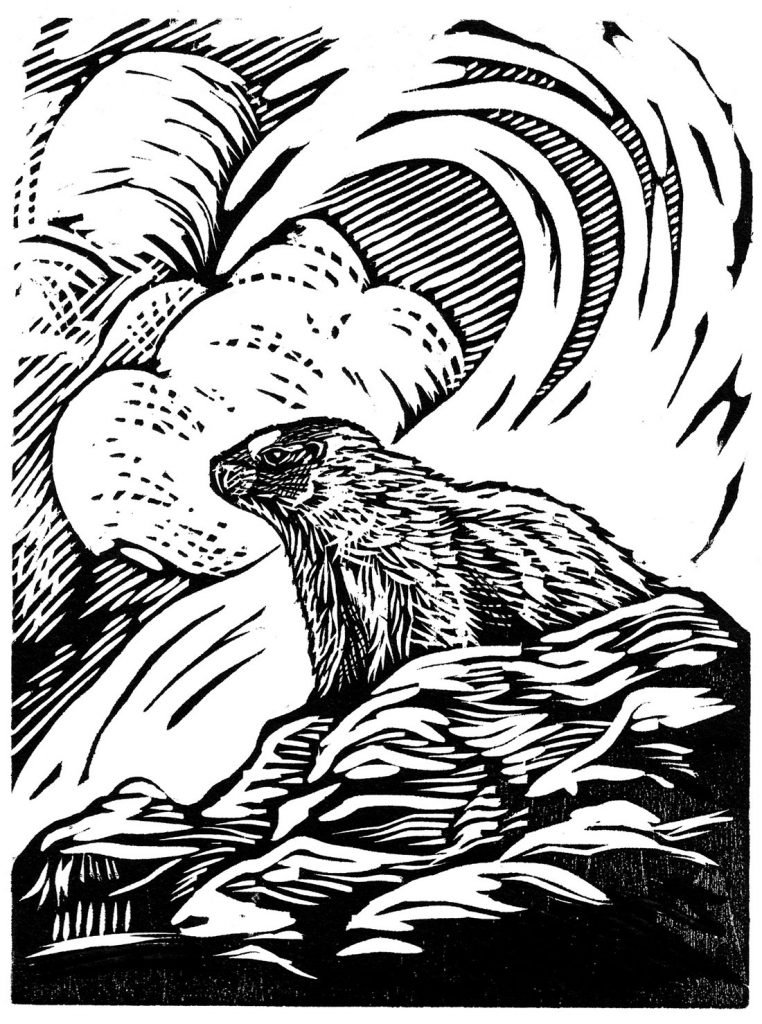 Hoary Marmot lives in colonies with a dominant male attending mating duties. When times are lean, one male and one female alone birth and raise their brood.

Marmot often benefits other beings in their community. Abandoned holes become homes for other small mammals, and in moderation, their digging and defecation loosens, aerates, and improves the soil. So don’t let their siren scare you off. These wilderness whistlers may be reminding you to pay attention—or just to stretch out across the warm rocks and take a nap.

Fur-fat and stock-still in the trail
they appear to be looking
into a mythic sky, posed
for a feral portrait, or a wish
to draw us closer before they turn
and level a frontal marmot scrutiny.
The way their noses aim askance
says they’re not here. Or we
are gone. Or we are here

but they’re not sure.
Upright on boulders, they are ready
to tumble at the shrill signal
if we become, in a blink,
by sneeze or shuffle, believable.
Our pack-heavy shapes, gathered
in their sky, look up
to Shuksan: how distant

and present it juts, how sharp
a lookout, clarity
we envy through tilted glass
until from every nowhere
the whiteout. When the peak
disappears, we turn and labor
down the moraine, switchbacking
like mules silently spaced
in the falling snow.

While we drive our miles and climb
to bright rooms, they settle
below in a general huddle,
slowing for their long dream.
Between one flake
and the infinite next, one pulse beat
and the second, our burdened forms
waver and loom, weave and are gone.